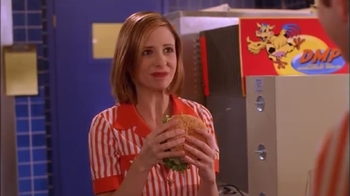 Willow updates Xander and Anya about the Trio, explaining that the three seem to have disappeared and moved from their basement lair. Anya chimes in with supportive statements about working hard for money and the importance of working in America just before Buffy appears, wearing a uniform for her new job. Later, Buffy is introduced to the world of fast food with the help of a unique and graphic video about her new place of work, the Doublemeat Palace. Her boss, Manny, introduces Buffy to her unenthusiastic coworkers and walks her through the area behind the counter, clearly identifying off-limit locations.

Buffy is offered the Doublemeat Medley, a burger consisting of typical ingredients and layers of meat and chicken, and Manny requires that she eat it. She reluctantly takes a bite, then questions what the secret ingredient in the meat is, but gets no clear answer. Buffy watches as a coworker, Gary, waits on a woman wearing a wig who is a regular at the Palace. After his demonstration, Buffy takes the next customer, but is lost quickly in the process as the man's order is too difficult for her to follow.

During her break, Buffy sneaks around in the back rooms, searching for the truth behind the secret ingredient, but is caught by Manny. At the counter, Buffy finds her friends have come by to visit her and she treats Xander to a Doublemeat Medley. Anya goes on a rant about how behind the wedding plans are, partially blaming Willow for the complications. Later, Buffy receives a surprise visit from Spike at the restaurant. He teases her, suggesting that she took the job to feel normal given that Buffy may possibly be a demon now. Buffy strongly refutes this, despite the fact Spike's chip now allows him to hurt her. Spike then tries to persuade her to leave the job and be with him, warning her that this job could kill her. He offers to do everything in his power to take care of her and help her with her money problems. She remains determined and turns away. Gary goes out to the alley behind the restaurant and encounters someone/something that he recognizes; then that someone or something attacks him.

The next day, with Gary not there to work, Buffy is told to work the grill and another coworker, Timothy demonstrates the process for her. Again, Buffy asks about the secret ingredient, but still can't get an answer from anyone. Manny then assigns Buffy to a double shift because of the reduction of employees. At the apartment, Xander talks to Anya, who's in another room, about Buffy working a double shift just before Halfrek, a female Vengeance demon appears suddenly before Xander, threatening to tear him into pieces. Fortunately, Anya enters the room and recognizes the Vengeance demon as an old friend and the girls greet each other gleefully. Anya clears up the confusion, explaining that she invited Halfrek to the wedding, not to seek vengeance on Xander. Wisely, Xander leaves to let the girls chat.

Back at the Doublemeat Palace, Buffy spots Spike outside through a window and spends her break having sex with him in the alleyway out behind the restaurant, though she looks thoroughly disinterested. Amy pays Willow a visit, wanting her rat cage as a souvenir and talks with Willow about her progress with avoiding magic. Before she leaves, Amy (wanting to get Willow back onto magic) gives Willow an unasked-for gift: A magical boost of power she can't quite control. Buffy watches the grinder grind meat, but discovers a human finger in the processed meat. Appalled at the idea of human meat being the secret ingredient, Buffy confronts Manny about it, but he doesn't agree with her suspicions. Buffy charges out into the dining area, attempting to stop all the patrons from eating while shouting that the meat is made of humans. The outburst gets her fired.

Over drinks, Anya and Halfrek talk about Anya's relationship with Xander and Anya begins to re-evaluate her situation with Xander after Halfrek repeatedly insists on addressing the issue. A meeting is called at the Magic Box as Buffy presents the severed finger and a Doublemeat Medley as evidence for her "people burger" theory, but Xander eats the burger before Buffy explains her theory. Willow arrives late, ready to begin researching despite the fact that she's still under Amy's gift spell and lacks control over her use of magic. Buffy leaves to investigate Doublemeat Palace after hours while Willow uses science to test a leftover piece of meat from the Doublemeat Medley.

Buffy breaks into the fast food place and finds clues: Blood and Manny's severed foot. Willow struggles to avoid using magic while Dawn and Xander talk about the kind of future life Buffy will have because she's the Slayer. Then Anya shows up late after Halfrek's departure, and a tense argument develops between her and Xander over the less-than-attractive appearance of a Vengeance demon.

Willow's analysis reveals that the basic composition of the "meat" is cellulose. While continuing to snoop, Buffy encounters the regular customer, Wig Lady, without her wig. A demonic lamprey-like appendage emerges from the lady's head and sprays a paralyzing liquid at Buffy. The lady advances on Buffy and talks about eating Doublemeat employees as the Slayer struggles to escape.

Willow shows up and tries to inform Buffy of the Doublemeat Medley which is not made of humans, but processed vegetables, then begins to confess to her about Amy's magical gift. Buffy's unable to respond to the information as she continues to try to get away from the demon, which manages to latch onto her shoulder and start to feed. Inside, Willow tries to stop the Wig Lady, using a large blade to cut the lamprey from the woman's body. That doesn't immediately kill the lamprey and Willow quickly shoves it into the meat grinder. The next day at the Summers' house, Amy pays Willow a visit, needing to borrow a few necessities. Willow denies her entrance into the house and angrily suggests that Amy stay away from her.

Buffy returns to the Doublemeat Palace to return her uniform to the new manager, Lorraine. After revealing her knowledge of the Doublemeat Medley's composition, she is sworn to secrecy. She gets her job back and resigns herself to working there, at least for now.