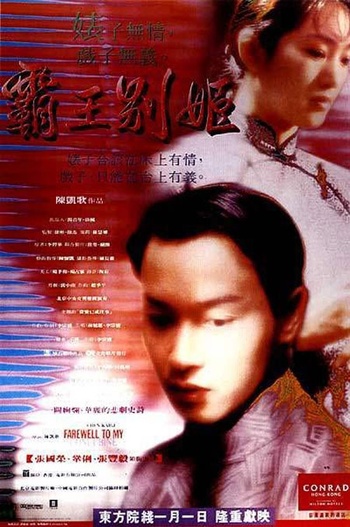 One of the most important works of the 5th Generation Chinese filmmaker Chen Kaige, Farewell My Concubine is the story of two Peking Opera actors (Douzi/Cheng Dieyi and Shitou/Duan Xiaolou) and their tumultuous relationship that spans 53 years. The film starts in 1924 Beijing, where Douzi is left (minus a sixth finger) at an opera school by his mother, a prostitute who can no longer afford to keep him at her brothel. Douzi quickly befriends the brash and domineering Shitou, and they spend their childhood learning the acrobatics, dances, and songs that make up Beijing Opera. Shitou learns male roles, and Douzi learns female roles. They both become hugely famous actors, and their trademark performance is the opera Farewell My Concubine, in which Shitou (whose stage name is Duan Xiaolou) plays the King of Chu, and Douzi (whose stage name is Cheng Dieyi) plays his concubine Yu. Through the Nationalist government, the Japanese occupation, the Communist takeover, and the Cultural Revolution, Dieyi and Xiaolou's relationship becomes strained, in part due to political pressures, and in part due to Xiaolou never returning Dieyi's affections, and Dieyi's subsequent jealousy when Xiaolou marries a prostitute named Juxian (played by Gong Li).
Advertisement:

The film is one of the first Mainland Chinese films to feature homosexuality and gender identity as a central theme, and Chen Kaige personally considers it his apology to his father, whom he had publicly denounced during the Cultural Revolution. It's also considered one of the finest films of modern Chinese cinema.