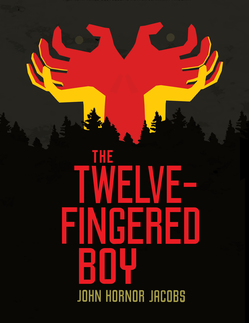 "I am not yet whole. Had I been, I could make this entire yard of boys kill each other. Gleefully."
— Quincrux, The Twelve-Fingered Boy
Advertisement:

The Twelve-Fingered Boy Trilogy is a series of books written by John Hornor Jacobs. The main focus of these books is Shreveport Justice Cannon (or "Shreve"), a smart-mouthed convict and candy dealer in Casimir Pulaski Juvenile Detention Center. However, Shreve's mundane life in prison is changed by the arrival of his new cell mate: Jack Graves. Jack is quiet and reserved; however, his most striking feature is his fingers. Namely, that he has twelve of them.

With the mystery of Jack's origins and powers along with an unnerving man determined to get him, Shreve certainly has his work cut out for him. Unfortunately, things are only getting started....