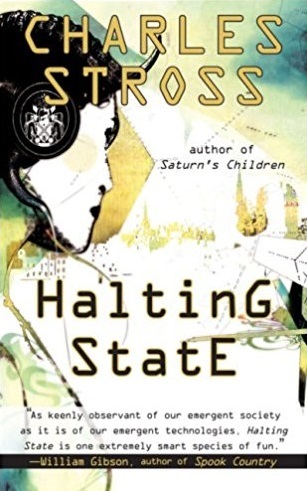 Halting State is a 2008 Post-Cyberpunk novel by Charles Stross.

Sue, a police officer in Edinburgh, responds to a call about a theft at a software company, only to learn that what was stolen is a bit out of her area of expertise: several hundred thousand Euros worth of virtual valuables from Massively Multiplayer Online Roleplaying Game. To make things more interesting, one of the company's main programmers, a reclusive work-from-home type, is missing without a trace, and nobody in the office can recall having ever seen him.

Elaine is a Forensic Accountant, who specializes in digging through other peoples' books to look for evidence of fraud or other financial negligence. She is also a reenactor and a sword-fighting enthusiast. Her company sends her to Edinburgh to try and find out if one of their clients was up to some shady business leading up to the robbery.

Jack is incredibly hungover, recently laid-off from his programming job, and handcuffed to a signpost somewhere in the Netherlands, with a Dutch cop standing in front of him expecting a good explanation for how he got there. Upon returning home to Scotland, Jack signs up with a temp agency to find more work. He is surprised to see that he is almost immediately hired as a consultant with Elaine's company to help investigate what happened in Edinburgh.

All three of these people are going to quickly realize they might be in over their heads as the online bank robbery proves to be much more than it seems. In a World… where Everything Is Online (really), even the cops and the criminals, these three characters will have to think on their feet once something manages to compromise the network and use it against them.