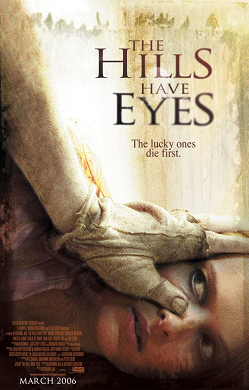 The Remake of the 1977 horror film by French director Alexandre Aja, who is also responsible for High Tension, and starring Aaron Stanford, Kathleen Quinlan, Emilie de Ravin, and Ted Levine.

A typical American family is on vacation. They are soon stranded in the middle of a desert when their RV breaks down thanks to sabotage and end up being terrorized by a family who are mutated from nuclear fallout by government testing in the area.

A sequel was released in 2007. There's also The Hills Have Eyes: The Beginning, a prequel/interquel graphic novel.