Film / We Are What We Are 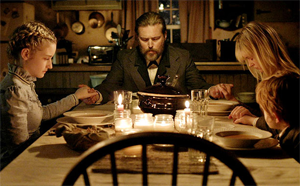 A special dinner with the Parker family.
Advertisement:

We Are What We Are is a 2013 horror film that also has elements of drama. It is a remake of a 2010 Mexican film of the same name, but with some details changed. The film stars Bill Sage, Ambyr Childers, and Julia Garner, and was directed by Jim Mickle.

The story involves the Parkers, a family who follow a hallowed tradition that has been in their lineage for many years. It is the responsibility of Mrs. Parker to ensure that observance of the tradition comes to pass, but after she dies, it falls upon the eldest child in the family, Iris. Her slightly younger sister Rose also takes on some responsibility, albeit with more hesitation. Her reluctance becomes entirely understandable when it is revealed that the Parker family tradition is a yearly cannibalistic dinner.

We Are What We Are provides examples of: