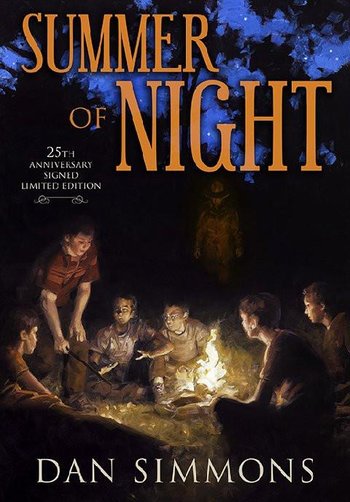 Summer of Night is a 1991 novel written by Dan Simmons.
Advertisement:

It's the summer of 1960 in Elm Haven, Illinois, and five 12-year old boys are forming the bonds that a lifetime of changes will never erase. But then a dark cloud threatens the bright promise of summer vacation: on the last day of school, their classmate Tubby Cooke vanishes. Soon, the group discovers stories of other children who once disappeared from Elm Haven. And there are other strange things happening in town: unexplained holes in the ground, a stranger dressed as a World War I soldier, and a rendering-plant truck that seems to be following the five boys. The friends realize that there is a terrible evil lurking in Elm Haven...and they must be the ones to stop it.

In 2017 it was announced a film adaptation was under production.