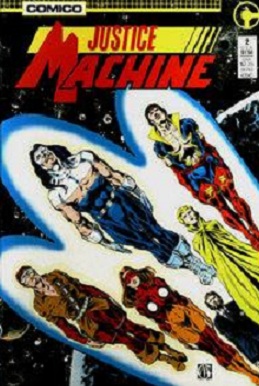 Justice Machine was a comic created in 1981 by Mike Gustovich. After five or six issues (and one annual) from the short-lived Noble Comics, it was restarted at Comico first as a four-issue series (with a team-up by a group called the Elementals) before graduating to a regular series.

The group itself was a team of super powered operatives serving the government of a planet called Georwell. As it turned out, Georwell was a Big Brother-styled Police State. In their pursuit of Maxinor, a rebel who was opposed to the Georwellian government, they came to Earth where they began to realize the truth about Georwell, especially after being set up by their superior, Chief Prosecutor Zarren.

The Justice Machine is composed of:

Later, Maxinor's son, Youthquake becomes a member of the team. He has the power to control earth but is unable to speak.

Joining their ranks is an earth woman named Krista Clay who has taken the codename Chain.

A Justice Machine revival, Object Of Power, is currently available.