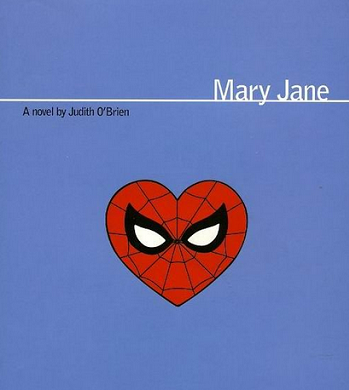 Mary Jane: A Novel, and its sequel, Mary Jane 2, are two novels published in 2003 and 2004 respectively, chronicling the high school life of Mary Jane Watson. The first book deals with issues such as anorexia and peer pressure, while the sequel deals with the continuing relationship between Peter and MJ, and the emergence of Gwen Stacy.
Advertisement:

In the first book, Mary Jane moves back to Forest Hills, where she reunites with her old friend, Peter Parker. Then their class attends a field trip to Osborn Industries, where Peter is bitten by a spider and gets spider-powers. Norman Osborn uses the drugs that he injected into the spider that bit Peter to create a soft drink, which he markets to MJ's classmates, but is thwarted by Peter and Mary Jane as part of their science project.

The second book introduces Gwen Stacy, an "ugly duckling" who MJ gives a makeover to, accidentally creating a rival for Peter's affections. At the same time, Harry Osborn returns to school, now broke due to his father being thrown in jail.

The novels were a hit with girls who weren't familiar with comics, but was criticized by fans of the comics for its characterization of some characters (particularly Harry) and the changes it made to continuity.

Despite being advertised as part of Marvel's Ultimate line, it really has nothing to do with the Ultimate comics.