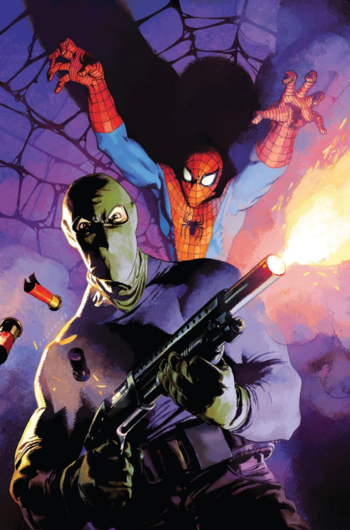 Sins will be Cleansed

Sins Rising is a 2020 Spider-Man storyline. It is the second major storyline event for Nick Spencer's Spider-Man. It starts in issue #45 of The Amazing Spider-Man Volume 5 and ends in issue #49, with a prelude recapping the story of Sin-Eater and a one-shot called The Sins of Norman Osborn being released as a part of the story.

Kindred, the enigmatic villain that has been working behind the scenes for the entirety of Spencer's run, has revived the Sin-Eater and provided him new, demonic powers. Now, the resurrected serial killer is becoming more powerful with every villain he eliminates, and he takes it upon himself to start a crusade against New York's costumed villains. Dead-set on proving his seemingly deranged set of morals superior to those of Spider-Man, Spidey himself also starts questioning his own code- not only does the Sin-Eater quickly gain public approval, but the fate he subjects his victims to reminds Spider-Man of his own actions, long ago. After taking his message public, and promising power to anyone who will help him in his quest to rid the world of sin, Sin-Eater gains a large following and sets his sights on Norman Osborn, forcing Spider-Man to go and save his own worst foe. The story starts in issue #45

The Spiritual Successor to the infamous The Death of Jean DeWolff storyline, Sins Rising serves as the opening chapter of the direct confrontation between Kindred and Spider-Man after the former has spent nearly all his previous appearances lurking in the shadows. It directly leads into the next major Spider-Man storyline, Last Remains.