Spoilers for Nick Spencer's Spider-Man will be unmarked. You Have Been Warned. 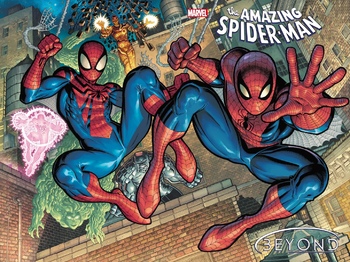 Spider-Man Beyond is a 2021 storyline in the Spider-Man series, succeeding Nick Spencer’s tenure with the character, written by Zeb Wells, Kelly Thompson, Saladin Ahmed, Cody Ziglar, and Patrick Gleason, the latter also filling double duty as the artist alongside Sara Pichelli. The story starts in Amazing Spider-Man #75, with a short story teasing the era beforehand in Free Comic Book Day 2021: Spider-Man/Venom.

Following Nick Spencer's Spider-Man and the events of Sinister War, Peter Parker is exhausted. However he gains a new headache upon discovering that Ben Reilly, his clone and a fellow Spider called the Scarlet Spider, has donned a new Spider-Man costume and is backed by the Beyond Corporation, who has taken a liking to him recently.

Despite this, the two Spider-Men join forces... But their first team-up leaves Peter Parker seriously injured, putting him out of commission as a superhero for a while. Can Ben Reilly handle the mantle of Spider-Man again, after everything he’s endured?