Comic Book / Spider-Man/Black Cat: The Evil That Men Do 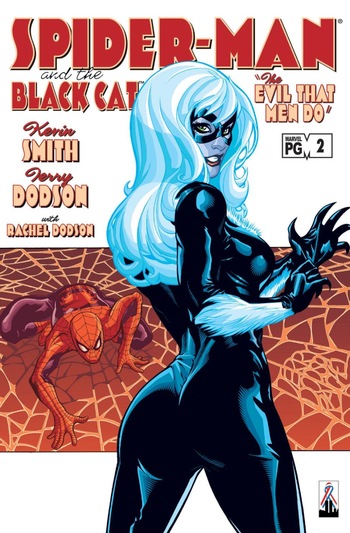 Spider-Man/Black Cat: The Evil That Men Do #2
Advertisement:

Spider-Man/Black Cat: The Evil That Men Do is a six issue mini-series starring Spider-Man and the Black Cat. The comic is written by Kevin Smith, with art by Terry and Rachel Dodson.

The story begins with Spider-Man investigating the death of Donald Phillips, a student who seemingly died from a drug overdose but with no evidence as to how the drugs got into his system. Spider-Man's only lead is an actor named Hunter Todd. Meanwhile, the Black Cat, Spider-Man's ally and former romantic partner, is searching for her friend Tricia Lane who was last seen with Todd. When they realize the connection between their two cases, Spider-Man and the Black Cat team up to solve them together while dealing with their unresolved feelings for each other and the tragic end of their relationship. Spider-Man and Black Cat's investigation ultimately leads them to Garrison Klum, a mutant with minor teleportation powers which he uses in his drug dealing business. When Garrison is killed, Felicia is suspected but it turns out to be Garrison's brother Francis.

The series was infamous for two things. One was the long hiatus. The series began in 2002, as an intended lead in for a planned run on the main Spider-Man title by Smith. However, after the third issue, the series went on an unplanned hiatus until 2005, when Smith revealed he had finally finished writing the scripts. The final three issues were published in 2006.

The other source of controversy was the Retcon to the Black Cat's backstory. Originally, Felicia Hardy became the Black Cat to follow in her father's footsteps as an expert thief. However, Evil That Men Do rewrites Felicia's reasons for becoming the Black Cat. This retcon was not well received and has thus far gone unaddressed outside of this series.

The mini-series' most lasting introduction to the Spider-Man franchise was Francis Klum, the third Mysterio who was last seen being stabbed by the villain Ero.

Tropes used in or associated with Spider-Man/Black Cat: The Evil That Men Do: