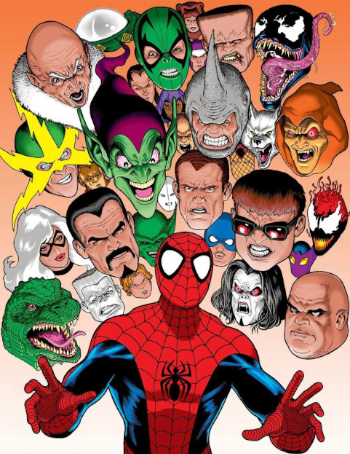 This sheet refers to characters from the Spider-Man series.

The Amazing Spider-Man series became one of the Cash Cows of Marvel Comics back in the day not only for his amazing writers or its unlikely protagonist but also because of its rich, diverse list of supporting characters that kept growing over the years. In this sheet are listed the many individuals that participated in the life of Spider-Man and Peter Parker.

As you probably have noticed already, the Spiderverse is incredibly huge and the many works related to Spidey usually have a lot of differences between them, so for this sheet to be more organized, please only list examples for the original 616 Spider-Man and his amazing cast of characters.

Remember, this sheet is for characters and examples from the Prime Marvel Universe Spider-Man series only. Please do not list characters, or examples from other shows, movies or alternate universes here. If you thought of a trope that fits a Spidey from another universe, please take that example to its respective page.

Characters with their own pages:

Other Spideys can be found on: