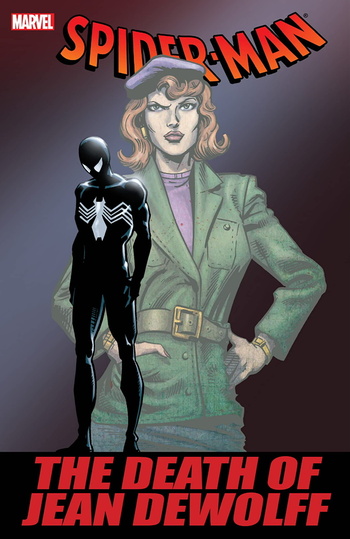 The Death of Jean DeWolff is a four-part Spider-Man story arc. Written by Peter David in 1985-86, the story ran from #107 to #110 of Peter Parker, The Spectacular Spider-Man. The story was the second professional comic book writing assignment for David and the beginning of his "break" into comic book writing.
Advertisement:

A call to police concerning a powerful stench in an apartment leads to a frightening discovery: Captain Jean DeWolff, a respected NYPD officer and Spider-Man's Friend on the Force, is dead, shot in the chest. When Spider-Man learns of this, he begins his search for the deadly "Sin-Eater", though will Spidey's Thou Shalt Not Kill rule survive as he grows more and more desperate and angry and can Daredevil help Spidey?

Peter David would revisit this saga two years later on the same title, rechristened "The Spectacular Spider-Man", running through issues #134-136 detailing the aftermath of the Sin-Eater attacks and titled Sin-Eater Released. Nick Spencer would create a Spiritual Sequel during his run on The Amazing Spider-Man entitled Sins Rising