Film / War of the Worlds 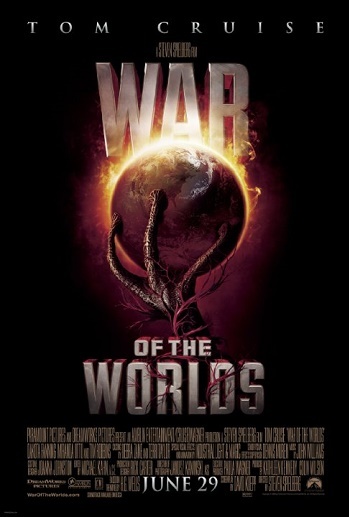 He's got the whole world in his hands.
"No one would have believed in the early years of the 21st century that our world was being watched by intelligences greater than our own; that as men busied themselves about their various concerns, *they* observed and studied, the way a man with a microscope might scrutinize the creatures that swarm and multiply in a drop of water. With infinite complacency, men went to and fro about the globe, confident of our empire over this world. Yet across the gulf of space, intellects vast and cool and unsympathetic regarded our planet with envious eyes and slowly, and surely, drew their plans against us."
— Opening Narration

A 2005 science fiction disaster film directed by Steven Spielberg, written for the screen by David Koepp and Josh Friedman, and starring Tom Cruise, Dakota Fanning, Justin Chatwin, Tim Robbins and Miranda Otto, narrated by Morgan Freeman and very loosely based on the classic H.G. Wells novel of that name.

Ray Ferrier (Cruise), a dockworker living in New Jersey, is gearing up to spend some time with his estranged kids, teenage Robbie (Chatwin) and 10-year old Rachel (Fanning), while their mother and her boyfriend visit her parents in Boston. After about twenty minutes or so showing the rather strained relationship between them, metal tripods start rising up from underground annihilating everything in their path and strange red weeds begin to grow in abundance on the Earth's surface. Soon, a war between mysterious alien lifeforms and humanity breaks out, and Ray does everything he can to keep his kids and himself safe while they head to Boston in the hopes of regrouping with their family.

The film is the second collaboration between Spielberg and Cruise after Minority Report. Not to be confused with two separate films released the same year, both titled H.G. Wells' The War of the Worlds. Directed by Timothy Hines and David Michael Latt, both were released directly to video and were overshadowed by Spielberg's production. The David Michael Latt film even received a sequel, named War of the Worlds 2: The Next Wave.

"From the moment the Invaders arrived, breathed our air, ate and drank, they were doomed. They were undone, destroyed, after all of Man's weapons and devices had failed, by the tiniest creatures that God in His wisdom put upon this Earth. By the toll of a billion deaths, Man had earned his immunity; his right to survive among this planet's infinite organisms. And that right is ours against all challenges for neither do men live...nor die...in vain."
Feedback

In the midst of an alien invasion, Ray bonds with his daughter.

In the midst of an alien invasion, Ray bonds with his daughter.