Webcomic / The Witch and The Bull 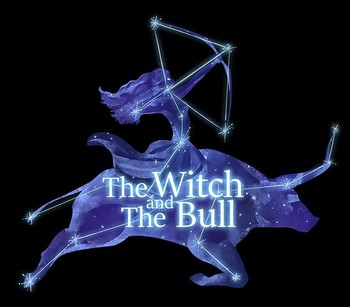 In a world of fantasy and magic, rests a kingdom that is coming off a war with witches. Things are at a tentative peace though the royal guard still keep on the lookout for any witches. The leader of the kingdom, Deo, is trying to strive for a peaceful co-existence though his advisor and friend, Tan, is resistant to this as he thinks if they show weakness, the witches will take them over. While out and about, Tan goes to a recently opened bakery run by a woman named Aro that has been gaining popularity. However when Tan finds out she's a witch (albeit one that's peaceful), he callously uses his political power to have it shutdown because of his bias.

Karma comes a knocking though when in the following day, he suddenly wakes up to find himself turned into a bull. Naturally no one can understand him in that form...save Aro who he runs into in a twist of fate. Thus the two are forced to travel to undo the curse placed on him, unaware that something big is brewing by malicious forces that could plunge the kingdom back into danger.

Drawn by an artist named Moonsia and hosted on Webtoons. You can read it here