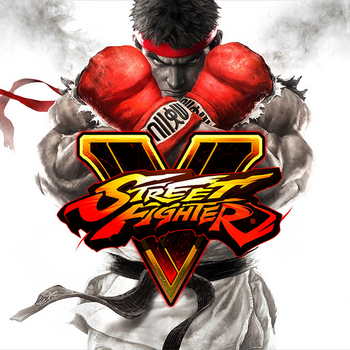 Rise Up!
Street Fighter V is a 2½D Fighting Game developed and published by Capcom as the fourth Numbered Sequel in the Street Fighter franchise. It was announced on December 5, 2014 and was released on February 16, 2016 for the PlayStation 4 and Windows PC, with crossplaying avaliable for both platforms. Capcom further clarified that the game will not be released on Xbox One due to a development partnership with Sony Computer Entertainment.
Advertisement:

The game takes away the Focus and Revenge mechanics from Street Fighter IV and replaces them with a new Variable system centered around a V-Gauge that is filled using character specific V-Skills. The V-Gauge in turn can be used to power moves called V-Reversals and V-Triggers. The game also features interactive arenas, with special animations when a player is defeated in a certain part of the arena.

Storywise, it marks the debut of a more thorough Story Mode. Characters have their own individual prologues in the style of visual novels with fights in-between, similar to what Arc System Works are known for; Bengus is providing the artworks for the character prologues, this being his return to the series 18 years after his work on Street Fighter Alpha 3. A free update released in June 2016 adds a cinematic Story Mode

As for future updates, Capcom will forego their usual practice of updated re-releases. Instead, all gameplay updates will be free. Characters can be unlocked either with earn-able in-game currency called Fight Money or bought with real money.

Capcom plans to support the game with additional characters and content for at least five years, with Alex, the first character of "Season 1" of downloadable characters, being made available a month after the game launched.

On October 5, 2017, a new version of the game was announced; Street Fighter V: Arcade Edition, both as a new release and as a free update for those who already have the game, allowing new players to hop in with all of the extra content and also keep their promise of players only ever needing to buy the game once. Arcade Edition not only adds in arcade mode, but six different arcade mode styles, each one themed around a past Street Fighter title.note Some select routes have counterpart stand-ins to keep the size of the roster adequate, such as Balrog acting as Mike in the Street Fighter I route, or Laura for Sean in the Street Fighter III route. There's also Extra Battle mode, where players fight against unique NPC enemies for Fight Money rewards and special costumes. Additionally, there's now an art gallery, a complete revamp of the UI, and each character is now has a second V-Trigger that can be chosen before the match begins. Arcade Edition was released on January 16, 2018.

On November 17, 2019, yet another new version of the game was announced; this time titled Street Fighter V: Champion Edition, similar to Arcade Edition, it will be both a new release and a free update for previous owners of SFV. It will be released on February 14, 2020. This version also added a second V-Skill in the form of V-Skill II, which was made available in a December 2019 update. Champion Edition included 40 characters, including the latest DLC characters Gill and Seth, 34 Stages including the new stage Sun Chase Moon, and over 200 costumes, with the exceptions of Fighting Chance, Capcom Pro Tour, and Brand Collaboration costumes not included and either have to be unlocked or bought separately. Champion Edition was made available both physically/digitally as its own individual product, and through a slightly lower priced DLC bundle labeled as an Upgrade Kit.

On May 27, 2020, it was announced that the game will receive a final season of content. Billed Season V, it features six additional characters and three new stages for a grand total of 46 fighters — the highest seen in any previous iteration of the franchise. Of the six characters, three of them are returning from previous titles: Dan Hibiki, Rose, and Oro. The remainder consists of Akira Kazama, the first character from Rival Schools to make a playable appearance in a Street Fighter installment, Luke, a brand new original fighter connected to the future of the series, and a mimic character named "Eleven" that takes the random fighting style and form of a member of the cast each match. The cast of Season V was released over time between Winter 2020 and Fall 2021. Season V also introduced another new V-System mechanic called "V-Shift", which allows a character to use their V-Gauge to evade an opponent, either to counter at range or to strike back with a V-Shift-specific move.

Not to be confused with Street Fighter II V, an anime by Group TAC based on the series.

ANOTHER FIGHT IS COMING YOUR WAY!

I Will Kill You!

I Will Kill You!