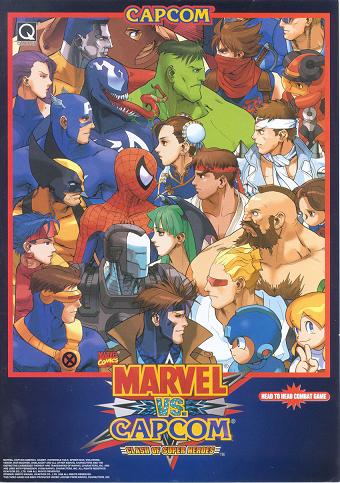 They surely want to beat the crap out of the other.

The Marvel vs. Capcom games are a series of licensed Fighting Games made by Capcom, using the Marvel license. Encapsulating a total of eight games, it is by far the largest Capcom vs. series and the longest-running of them all (so much so that beyond Marvel Super Heroes, Capcom themselves refer to the series as "The vs. Series").

The games of the series are the following:

Capcom also produced a couple of side-scrolling action games for the Super Nintendo Entertainment System around the same time. Namely X-Men: Mutant Apocalypse in 1994 and Marvel Super Heroes: War of the Gems in 1996. Prior to those games, Capcom released the Beat 'em Up The Punisher.

The series made its comic book debut in the 2014 Spider-Verse crossover, where it was given the Marvel Multiverse designation Earth-30847.

Tropes associated with series include: