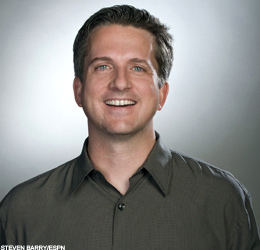 "Yep, these are my readers."
Advertisement:

, known for his pop-culture-reference-laden columns about current events in sports. He started out writing columns as the "Boston Sports Guy" in 1997, which were successful enough to attract the attention of ESPN; they hired him to write for their "Page 2" section in 2001, where he stayed until the summer of 2011, when he moved to the website Grantland

, an ESPN-owned offshoot blog staffed by a number of noted sports and pop culture writers, including several you wouldn't expect to write about sports (Dave Eggers?), of which he also served as editor-in-chief. Since 2007, he's also hosted a regular podcast called The B.S. Report.

Simmons is a native of Boston, and as such is a massive fan of Boston's sports teams (especially the Red Sox and Celtics), but moved to Los Angeles in 2002; he has since started rooting for the Clippers in basketball and (during the 2011 lockout) the Kings in hockey.

Simmons has also written two books, Now I Can Die in Peace (about the Boston Red Sox' 2004 World Series championship) and The Book of Basketball (which is a book of Simmons' opinions on basketball). He was also a writer for Jimmy Kimmel Live! for a time, served as executive producer for ESPN's 30 for 30 documentaries, and, as of 2012, serves as a panelist for NBA Countdown on ABC and ESPN.

In May of 2015, Simmons appeared on The Dan Patrick Show, a move which reportedly was the tipping point with ESPN. They announced they would not be renewing his contract after September, and Grantland was shut down a month later. He was since hired by HBO, and he is curating a new site for them, The Ringer

, along with a documentary

series in the style of 30 For 30 and a new talk show, Any Given Wednesday.

Yup, these are his tropes: