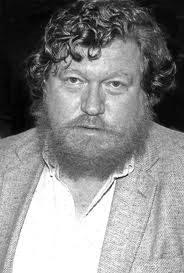 Karl Edward Wagner (4 December 1945 – 13 October 1994) was a American writer of Horror, Science Fiction, Fantasy, and Poetry as well as a publisher and editor. A fan of Robert E. Howard, he edited a three-volume set of the Conan the Barbarian stories that restored them to Howard's form as written; he also did a number of pastiches featuring Conan and Bran Mak Morn. Other editing work included fourteen volumes of the long-running anthology series The Year's Best Horror Stories and several collections of the work of Manly Wade Wellman. His most popular works are the long-running stories of Kane, the Mystic Swordsman, and his often-anthologized short story "Sticks".

Works by Karl Edward Wagner that have their own trope pages:

Other works by Karl Edward Wagner provide examples of: