Comic Strip / Heart of the City 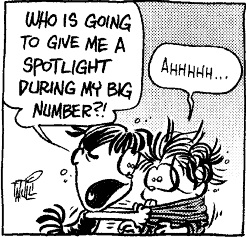 Heart of the City is a comic strip that has been running in newspapers since 1998. Created by Mark Tatulli, who also writes and draws the macabre Liō, it focuses on Heart Lamarr, a high energy elementary schoolgirl in Philadelphia; her proudly geeky best friend Dean, and her frequently overwhelmed single mother.

The comic, complete with archives since 1999, can be found at GoComics

In strips beginning with the run date of April 27, 2020, Tatulli passed Heart of the City to cartoonist Christina "Steenz" Stewart, resulting in a very noticeable change in visual style.

Heart of the City provides examples of: