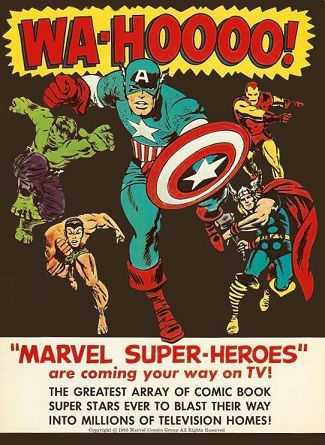 The M.M.M.S.note Merry Marvel Marching Society, true believer! wants YOU!
Meet a sulky, over-bulky, kinda Hulk-y superhero
A two-fisted and electrically-transistored superhero
An exotically neurotic and aquatic superhero,
The Marvel Super Heroes have arrived!
Super-powered from their forehead to their toes...
Watch 'em change their very shape before your nose!
See a cane-striking superhero change to Viking superhero
A hum-dingin', real swingin', shield-flingin' superhero
They're the latest, they're the greatest, ultimate-est superheroes,
The Marvel Super Heroes have arrIIIIIIIIIIIIIIIIIVED!
—Main Theme
Advertisement:

An Animated Anthology series from the 1960s featuring several Marvel Comics superheroes, and one of the first to do so. It is remembered today mostly for its extremely limited animation (using xerography with the art from the original comics) and ham-and-cheese-sandwich levels of theme songs, but it also was the debut in animation for several major Marvel characters, particularly those from these series:

The stories were all from the early comics, and so featured the origins of the heroes and most of their main enemies. The segments were short (about 7 minutes each) and were sold as a package, to be aired however the TV station wanted.

Contrary to popular belief, the So Bad, It's Good songs were not written by Stan Lee. They remain popular to this day, with Iron Man's theme even receiving some new treatments for his first live-action movie. (lyrics here

For all that it is made fun of today, the series made the "Marvel style" of superheroes (which during The Silver Age of Comic Books was relatively more serious than its rival DC Comics') more popular, and inspired a line of Animated Adaptations of other Marvel heroes, including Spider-Man and the Fantastic Four.

Not to be confused with the fighting game made by Capcom.