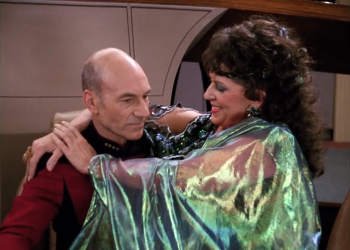 The Enterprise has arrived at Betazed for some trade negotiations and is hosting a formal reception in which they've reluctantly allowed the Ferengi to attend. In Ten-Forward, Lwaxana is once again badgering her daughter to find a man and give her grandkids. The Betazed grande dame attracts the attention of the Ferengi's representative, DaiMon Tog, who lusts after her as well as marvels at the business opportunities her telepathy would provide. She turns him down in disgust, but he's not one to be dissuaded.

The ship's next assignment is a routine examination of a star cluster, so Picard recommends that Riker sit it out and join Deanna on Betazed for shore leave. Lwaxana crashes their date to roll out a picnic for the couple and encourages their romance, but they're interrupted by Tog, who beams down with a bouquet of Ferengi flowers and a declaration of love. Lwaxana again rebuffs him, but this time Tog isn't taking no for an answer. He beams all four of them aboard his ship. It's a kidnapping!

Aboard Tog's marauder, the three captives awaken in a cell. The DaiMon beams Lwaxana and Deanna out of their clothes and into the laboratory of Doctor Farek to study their telepathic abilities. The Betazoids wrap themselves in some spare cloth as they telepathically plan their next move. Lwaxana pretends to be attracted to Tog and entertains his romantic offers. Tog sends Deanna back to the cell with Riker to have some alone time with Lwaxana.

Meanwhile on the ship, Wesley is preparing to enter Starfleet Academy. He has already passed his written exam and is about to leave for his oral exam. The crew remind him that there's no guarantee that he'll be reassigned to the Enterprise after graduation, so he could be leaving them for good. Wesley has trepidations about leaving his family and friends, but Geordi and Data assure him that change and opportunities for new adventures are an exciting part of the human experience.

Back with the Ferengi, Riker convinces his jailer to let him out of his cell to play a game of 3D chess. Riker knocks him out and tries to send a message to the Enterprise, but the console requires Tog's personal access code. Deanna telepathically asks Lwaxana to get it from him. Fondling his ears, Lwaxana proposes to a smitten Tog that she retrieve an aphrodisiac cocktail from the replicators, but she'll need his access code to program it. He's in the process of handing it over when Farek bursts in and stops him, accusing him of committing a serious security breach. He demands that Tog hand over Lwaxana for his potentially fatal mind probe experiments or be stripped of command. Tog reluctantly agrees.

On the Enterprise, the Betazoid ambassador finally manages to let them know that Lwaxana, Deanna and Troi have all vanished. The crew quickly deduce from the discarded bouquet at their picnic site that the Ferengi are responsible. Picard orders the ship to dedicate all its resources to listening for some trace of Tog's ship.

As Lwaxana is tortured by Farek's mind probe, Riker figures out a way to bypass Tog's security lockout by placing a crude message in the "static" of the ship's warp field. Aboard the Enterprise, Wesley puzzles at a mysterious sensors reading, but it's time for him to go. Just as he's about to beam away, he realizes that the warp field static is repeating the beat from the music that was playing during the recent Betazed reception. Wesley misses his window to leave as the Enterprise rushes to the rescue.

On the Ferengi ship, Riker grabs a phaser and forces Farek to take Lwaxana out of the mental probe before any permanent damage can be done, but Tog pops up behind him and disarms him. Luckily, the Enterprise arrives just then to demand the return of Tog's captives. Lwaxana convinces Tog to let Riker and Deanna go, while she will stay and accept Tog's proposal after all. Riker and Deanna beam safely aboard the Enterprise bridge.

When Picard demands the return of Lwaxana as well, Lwaxana curiously protests that she has no intention of leaving. Deanna tells Picard that Lwaxana wants Picard to win her back. The stodgy captain awkwardly professes his love for Lwaxana in an attempt to show Tog that he's adamant on her return. (Eventually he has to resort to quoting Shakespeare.) Lwaxana warns Picard not to kill Tog like he has all of her previous lovers; the Captain immediately switches to threats of physical violence, in the form of phasers and photon torpedoes. Tog, completely cowed, sends Lwaxana away without any further shenanigans. Lwaxana returns to the ship and immediately puts her hooks right back into Picard, who orders a return to Betazed as fast as the ship can possibly take them.

With the kidnapping resolved, Picard turns his attention to Wesley, who has missed the window for entrance into Starfleet due to his critical assistance during the crisis. Picard decides that it's unfair to keep Wesley as an "acting" ensign given his contributions to the ship. He gives the wunderkind a field promotion to full ensign. The newly minted Starfleet officer arrives on the bridge in a real uniform and charts a course for the ship's next adventure.