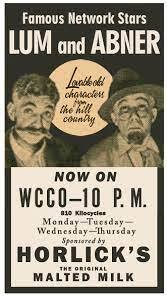 Lum and Abner was an American radio comedy series that aired from 1931 to 1954note with a hiatus that lasted from April 1950 until February 1953. It was created by Chester Lauck and Norris "Tuffy" Goff, who also played the main characters (Lauck played Lum; Goff played Abner).

The series initially took the form of a comedic soap opera. It was set in the ficitional town of Pine Ridge, Arkansas where the titular Lum and Abner operated the Jot 'em Down Store. Plots consisted of various adventures they and other Pine Ridge citizens had in the course of living their day-to-day lives. This could range from trying (and failing) to open up a new bakery to saving the town from hostile visitors.

In addition to the radio show, seven Lum and Abner movies were produced by RKO and released in theaters, the first one in 1940 and the final one in 1956. The show is (by all appearances) in the public domain and most of the episodes can be listened to for free here

This Work Contains Examples of: