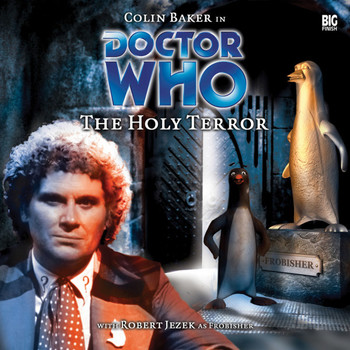 This was the first Big Finish episode to feature the shape-shifting companion Frobisher, from the Doctor Who Magazine comics. It's also Steven Moffat's favourite Sixth Doctor episode in all of Doctor Who, and it was a clear influence on his own "Heaven Sent".

Frobisher, the shapeshifting penguin detective, has convinced the TARDIS to create semi-living fish for him to toy with. The Sixth Doctor tries to explain that even semi-living things can feel pain and distress, but Frobisher won't listen until the TARDIS herself can't cope with Frobisher's games anymore and shuts down entirely. She parks the Doctor and Frobisher inside a medieval-style castle, where the new god-king is about to be crowned.

Upon arriving in the middle of the ceremony, the Doctor and Frobisher are instantly mistaken for the Holy Big Talking Monochromatic Bird and his companion who brings with him every colour of the rainbow. The new king, who's really very confused about the whole deal, becomes even more confused when the coronation fails to give him actual god-like powers. He's too nice of a chap to pretend he's divine, so he promptly abdicates and tells the people to assassinate him for blasphemy. They won't listen, though, and he's forced to accept his new role. The new king's wife begins with the ritualistic torturing and mocking of the old queen (who's not in the mood), while the high priest goes off to ritualistically conspire against the new king together with the evil half-brother.

While Frobisher stays with the king (after observing the ritualistic assassination attempt), the Doctor soon finds out that the old scribe's books are all written in the same handwriting. Even the ones dating back to previous dynasties. What's more, each king's life ends exactly on the final line of the final page of each book.

The king decides that he really, really, really doesn't want to do any of this, so he makes Frobisher the new god-king instead. This does not go over well with Frobisher.

Meanwhile, the evil half-brother has a secret that's decidedly not tradition. He has a child, a young boy who's been kept alive for five years in the castle's deepest dungeons. The child was raised "pure", without language — even his mother's tongue had been cut out during his birth. The child turns out to be a malicious God, intent on killing everyone it encounters. The Doctor is an unexpected factor in its plans, but — as the child finds out — isn't immune to Mind Rape. After violating the Doctor's memories, it goes off into the castle and starts murdering everything it can find... asking "are you my father?".

In the end, it turns out that the evil half-brother wasn't the child's father after all. It was the old scribe, whose punishment this prison pocket-world revolves around. The old man had once killed his own son, and had created the fantasy of kings hating their sons and princes becoming god-kings as a coping mechanism. He had already lived the story many times over, in a continuous loop, always ending with the child's murderous rampage. When the TARDIS' dimensional stabiliser became damaged by Frobisher forcing her to create semi-living lifeforms, she had fled to the nearest dimensionally transcendental space going through the same kind of thing, in order to repair herself with its data. The scribe confronts his child for the final time, and ends the "Groundhog Day" Loop by commiting Heroic Suicide.

The Doctor tries to pretend that none of it mattered, since none of it was real, but Frobisher reminds him that even sort-of-living things count.

The Doctor: If it's any consolation, they were never real in the first place.
Frobisher: No, Doc — that's no consolation. They thought they were real, didn't they?
The Doctor: Just like the fish in the swimming pool... they felt pain, they felt fear... and more than that, they had hopes, and dreams and families. Yes. It is terrible. But that's what comes of travelling in the TARDIS. All the people you meet, all the planets you see: you know they won't last forever. And our next journey could be to a time when they'll all have been long forgotten. Such little lives... that we could feel like gods, set apart from them all.
Frobisher: And... that's supposed to make me feel better?
The Doctor: No. No, not at all.
Frobisher: For a while back there, Doc... I actually felt I could do some good! I actually felt I could save them all.
The Doctor: I know, Frobisher. Believe me... I know.

The Holy Terror provides examples of:

"Are you my father?"