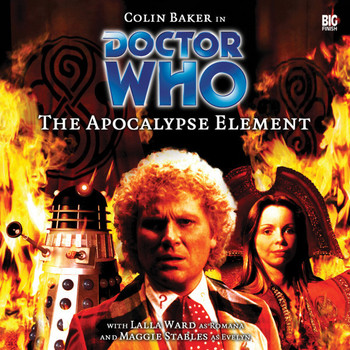 The Sixth Doctor and Evelyn gate crash an interstellar time/space conference and run into Vansell of the Gallifreyan C.I.A., who still doesn't get along with anyone. They discovered that a planet has been missing for twenty years. It happened to house a space/time MacGuffin bomb and, rather surprisingly, Lady President Romana of Gallifrey, who was abducted just weeks into her presidency.

The Daleks turn out to be behind the planetary kidnapping, and they've kept Romana as a slave for twenty years. She's rather broken, but bounces back as best as she can after the Doctor rescues her. The Daleks announce that they plan to destroy all of time and space using the MacGuffin bomb, and they need Gallifreyan technology to keep themselves Just One Second Out of Sync from the explosion. The Doctor, Romana, Evelyn and Vansell team up to stop them.

Part two of four of the Dalek Empire series, followed (from the Daleks' perspective) by "The Mutant Phase".