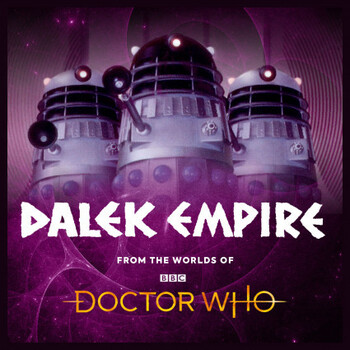 Dalek Empire is a series of linked audio dramas and one prose collection that make up Big Finish's first big Dalek epic, about the Daleks' almost entirely successful invasion of Mutter's Spiral (our galaxy) and the story of four people caught up in it: the Doctor, whose lives intersect with it at odd angles over hundreds of years; Susan "Suz" Mendes, a former Dalek slave who becomes the "Angel of Mercy" and finds herself walking the tightrope between rebel and collaborator; Kalendorf, a Knight of Velyshaa who becomes Susan's companion and secret rebel leader; and Alby Brook, a human spy who fell in love with Suz and now finds himself caught between his desire to find her and his duty to kill her as a collaborator.
Advertisement:

The five series are:

The main series arc, where the Daleks plan their invasion, which the Doctor encounters in Anachronic Order. The order given here is the Daleks' order of events, starring the Seventh, Sixth, Fifth and Eighth Doctors.

In which Susan Mendes, Kalendorf and Alby Brook live through the initial Dalek invasion of the galaxy and foment rebellion, while the Daleks execute their master plan.

In which the galactic rebellion and an unlikely ally fight the Dalek Empire.

It's 2,500 years later and people have forgotten the Daleks completely. Only Siy Tarkov is insisting the Daleks are back... but will anyone listen to him?

Four standalone stories from the time of the First Great Dalek War, interquels to the original series.

Specials and other releases

Tropes found in Dalek Empire, Dalek War and The Fearless: