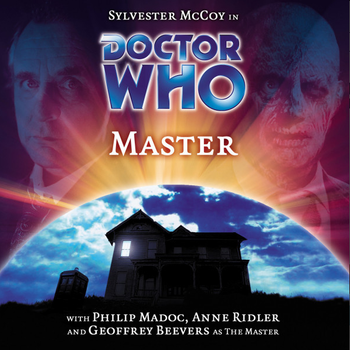 The final part of the "Villains Trilogy": three standalone episodes that explore how the Doctor and his archenemies aren't so different in the end. The other two parts are "Omega" and "Davros". The trilogy also thematically paved the road for the next episode, "Zagreus", although that episode is not standalone and is instead part of the Eighth Doctor's Story Arc.

This episode was based on the novel Human Nature and ended up inspiring the TV series episode "Utopia".

The Seventh Doctor surprises a sniper just minutes before an assassination attempt and, while waiting for the target's parade to arrive, offers to tell him a story...

In a dark old manor home, as a storm rages outside, friends have gathered to celebrate the birthday of Doctor John Smith, a disfigured but kind gentleman, who was once found wandering the streets of their home, Perfugium. John has no memory of who he was or where he had come from, and he's been living in Perfugium for ten years, with married couple Victor and Jacqueline as his closest friends. Now, having inherited a manor, a maid and a cat from a kind old patient, John simply wishes to enjoy the company of friends. And he'd rather forget the curse that's supposedly on the house — as well as the grisly murders of prostitutes that are going on outside, with Victor, a detective, being in charge of their investigations.

As the clock ticks and the wine bottles get emptier, the group of friends is surprised by the Doctor, who stumbles into the house weakened and babbling on about "DEATH". The Doctor — realising that the name "Dr. John Smith" is taken today — introduces himself as Dr. Vaughan Sutton. He tells John stories about another life, about a world outside the mansion and outside Perfugium. John feels an instant connection to a fellow man of science, and the two quietly start a friendship, with John telling the Doctor about Victor's overly scientific mind and Jacqueline's naiveté. Victor insists that every murder, every act of evil, must be provoked or performed by a deranged, sick mind. The evil are either meant to be cured or to be examined for scientific purposes. John would like to discover more options, and wonders what other motivations for evil might exist in the world. Meanwhile, Jacqueline herself acts oddly, even going so far as to slap the young maid, Jade, in the face. And suddenly, without provocation, the cat is murdered as gruesomely as the whores of Perfugium were, and what seems to be a poltergeist slams a copy of Dr. Jekyll and Mr. Hyde into the Doctor's face.

The Doctor, who's perfectly aware of just who John is, can see an obvious clue when it hits him and explains to John just what's going on. Long ago, when two boys on a planet far away were playing by the stream together, one of them was nearly drowned by a bully. The other took up a rock and, to save his friend, killed the bully. The two boys quietly burned the corpse, but their lives had changed forever — one ended up running away and became the Doctor, and the other, wrecked with guilt over having committed that murder, became the Master and turned into one of the most accomplished killers the universe had ever seen.

Meanwhile, Jade finds herself humming a tune about one who sits inside your head, and lives among the dead...

John is horrified to discover that the memory of being the Master is deep inside him, but before he and the Doctor can discuss it further, Jade reveals herself to be Death incarnate. She mocks the people gathered there — Victor for having committed the gruesome murders just to keep the whores away from Jacqueline, Jacqueline for being in love with John but never admitting it because of his low status in society, the Doctor for no longer merrily playing the spoons or mixing his metaphors, and John for being unable to cope with his past life.

The Doctor explains that he manipulated the entire situation, having made a deal with Death — insofar as such a universal concept can be said to have a consciousness — in order to grant the Master ten years of normal life. According to the deal, the Doctor would murder the Master at the end of that decade. But the Doctor can't bring himself to do it, and while Victor and his wife face the revelations that were made, the Doctor begins to realise that his mental image of the Master simply never included being loved or having friends... even if the Doctor would give anything to be a friend to the Master again. Victor, meanwhile, succumbs to Death's influence on everyone's mind, goes into a violent rage and murders Jacqueline, which greatly pleases Death. Death also reveals that this is certainly not the first deal she made with the Doctor... the first one was many years ago, on Gallifrey, after the Doctor murdered a young boy and begged Death, in a dream, to make his friend pay for it instead of himself. The Doctor can't believe the memories that are revealed to him, and realises with utter horror that the Master was supposed to be the one going around saving galaxies, and he himself might have ended up destroying entire chunks of the universe as Death's herald.

He and the Master are given a choice, since Death has the power to reset time, to erase memories and to create entire new scenarios just to please herself. The Master, now back to his old self, explains that his regular consciousness has been lurking helplessly in the back of the "John Smith" persona for ten years, waiting for a chance to strike — but he doesn't consider himself Death's pawn, but rather the other way around. Still, he understands his bond with the Doctor. The Doctor offers to make Death another deal and let John Smith, not the Master, choose what to make of his future, at the cost of the Doctor having to commit the murder of an innocent.

And that's why he told the story to the sniper — he plans to take the gun and commit the act himself. But he still can't go through with it, and the sniper gleefully reveals himself to simply be Death, taking great pleasure in watching the Doctor struggle with morality. John is given an opportunity to save Jacquelin's life by killing Victor before he can kill his wife, with the implication that if he takes a life, he will become Death's servant once more. The story ends where it began, with Victor and Jacqueline arriving at their old friend's house to celebrate his birthday, only to find him waiting with a knife. But as the events of that terrible night have not happened, Jacqueline does not understand why John is behaving this way, and she is horrified when he threatens to kill her husband. John is torn with indecision; if he kills Victor, Jacqueline will live, but she will not understand why he has done this and he will be doomed to become the Master once more.