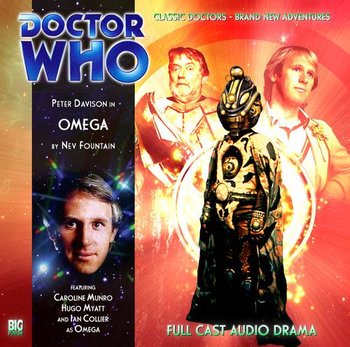 The first part of the "Villains Trilogy": three standalone episodes that explore how the Doctor are his archenemies are Not So Different in the end. The other two parts are "Davros" and "Master". The trilogy also thematically paved the road for the next episode, "Zagreus", although that episode is not standalone and is instead part of the Eighth Doctor's Story Arc.

A strange telepathic message prompts the Fifth Doctor to travel to the "Sector of Forgotten Souls", a place where, thousands of years ago, Omega's ship vanished whilst detonating a star. He's not the only one journeying towards it. "Jolly Chronolidays" prides itself on giving its tourists an experience of galactic history that is far better than mere time travel (at the very least, with better toilet facilities).

Five befriends a nice young stewardess named Sentia, and runs into a Hand of Omega re-enactment group, starring soap opera actor Daland as Omega and college student Tarpov as Vandekirian, Omega's treacherous associate. The trouble is that this sector of space tends to drive people batshit crazy, so Tarpov soon starts to believe he actually is Vandekirian and promptly begins losing limbs in order to create the Hand Of Omega. Also, Omega's actual ship turns up.

The Doctor resolves to save the day and, with the help of a nice old fellow Time Lord named Professor Ertikus, vworps aboard Omega's ship and tries to see what Omega wants. Omega (appearing as a bit of floaty light) hangs out with Five a bit, and they remenisce about Gallifreyan legends, about the bedtime story of Peylix (who stole bits of time, wanted to know everything in the whole universe, and got exiled and/or killed depending on the version), and about that time they traipsed about in Amsterdam.

Omega claims that, with nothing left in life, he just wants to get back to his old home in the antimatter universe. Five really tries his best to help him, but is (of course) betrayed by Omega as soon as he fixes the ship's circuits (connecting it to Professor Ertikus' TARDIS). Also, Omega claims that he's engaged to Sentia and that they're going to live happily ever after.

The Doctor is right confused about this whole thing, especially once the real Fifth Doctor vworps in three quarters into the story, sent there by the Time Lords because they got a distress call from "him". Five explains that when Omega made another copy of his body after Amsterdam, bits of the Doctor's memory came with it. And basically, Omega is completely insane now, making funny voices at himself, thinking he's both the Doctor and Omega, sending out distress calls to Gallifrey and ripping off people's hands.

Omega, coping with extreme Loss of Identity and really just wanting to go home and live happily ever after with Sentia, reveals the reason he became an exile from Gallifrey. During the big interstellar coup that he staged together with Rassilon, he made the choice to commit genocide in order to secure a planet. Vandekirian was never treacherous — he only tried to save those people. And when Omega was exiled, Rassilon — Opinion Flip-Flop — praised his old friend in order to move up in Time Lord society, clearing Omega's name. Also, Omega eventually reveals that as a student, he was the one who inspired the bedtime story of Peylix... because he was Peylix, and the story was more mundane and adorkable than any of Gallifrey's high and epic tales.

Omega reveals his past genocide to Sentia, who doesn't even care. This seriously shocks Omega, who realises that Sentia isn't just a sweet woman, but an insane Yandere who'd voluntarily spend her life with a mass murderer. But none of that matters in the end, because as Five reveals, Omega's genocide never happened... it was the Doctor who (accidentally) killed that race, and his memories have seeped into Omega's consciousness because of the clone body. No matter what Omega actually did during the dawn of Time Lord society, it wasn't that.

After Omega goes into an insane rage and manages to go out with a bang, someone from the Celestial Preservation Agency vworps in and kindly asks the Doctor not to tell anyone what happened. Not to preserve Omega's reputation — Omega is a joke to Time Lord society at that point — but to preserve the Doctor's reputation, who in the future will be seen as a hero. Five understands that he and Omega really are Not So Different, and that legends just don't tend to reflect the truth. Daland, the sole surviving witness, is taken away by the Celestial Preservation Agency and offered a cushy job as a Doctor re-enactor.