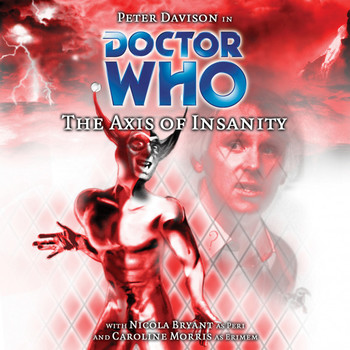 The TARDIS lands the Fifth Doctor, Peri and Erimem in the middle of the Axis. If diverging timelines are like the spokes of a wheel, the Doctor explains, then the Axis is where they converge and are kept from spilling over into the "real" timeline. And since the Time Lords tend to be responsible for 99% of diverging timelines, they're not extremely welcome in the Axis. The Doctor commands Peri and Erimem to stay inside while he investigates.

The Axis has been overtaken by a Monster Clown who calls himself "The Jester". Its Overseer has been murdered, and giant beasts from mythology all over time and space have been set loose in its Circus of Fear. Peri (of course) sneaks out for a look and rescues a guy from a divergent timeline who fell through a time portal and is rather confused about the whole thing. Erimem is saddled with the Jester pretending to be the Doctor, quickly figures out what's happening, and is smart enough to contact the real Doctor and start sorting things out. In the end, it turns out that the Time Lords had already been to the Axis to investigate, and one of them was murdered by the Jester (and had his memories stolen in the process). The Jester plans to steal the Doctor's TARDIS and open up other timelines to each other, but the Doctor stops him, with the help of a Heroic Sacrifice by their new friend.

Written by Simon Furman, better known for The Transformers (Marvel). This was his only contribution to the Doctor Who franchise.