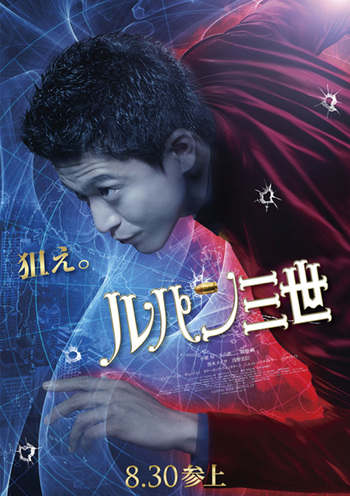 "To games well played."
"We're thieves. We steal back what Michael stole from us. With interest."
— Arsène Lupin III
Advertisement:

Lupin The 3rd is a film adaptation based on the manga of the same name, which was written and illustrated by Monkey Punch. It was released on the 30th of August, 2014, where the year represented the 40th anniversary of a previous adaptation: Strange Psychokinetic Strategy.

Arsène Lupin III is a master thief who resides with an international thieves' guild called "The Works". Having been taught by his mentor, Thomas Dawson, he relishes in stealing from the rich. But his escapades change when rival Michael steals the Crimson Heart of Cleopatra, causing the death of Thomas and sending "The Works" into ruin. With Michael intending on completing the necklace by retrieving a special ruby through an illusory crime lord, Lupin and his team attempts to seek vengeance, as long as a determined investigator doesn't lead the police straight to all of them.

Lupin The 3rd contains examples of:

"In the end, it's all about luck."
Feedback

Jigen fatally shows Royal why a gun's size doesn't matter. It's how you use it that counts.

Jigen fatally shows Royal why a gun's size doesn't matter. It's how you use it that counts.