Film / A Scene At The Sea 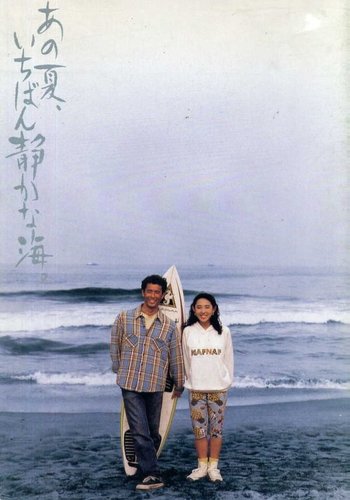 Shigeru is a deaf-mute garbage collector who finds a broken surf board during a shift. This discovery leads him to wanting to surf. Despite the mockery of his neighbors, as well as other surfers, he gets support from his deaf girlfriend Takako, and looks forward to entering a tournament.

Incomparable with the two previous films that Takeshi Kitano made (Violent Cop and Boiling Point), A Scene At The Sea is the first movie which breaks with a lot of standards found in other films by the japanese filmmaker, mostly the fact that it isn't a crime/yakuza drama and that Kitano doesn't act in it. This movie also marks the beginning of a long series of collaborations between Kitano and Joe Hisaishi, who would go on to provide soundtracks for most of the movies made by Kitano during the 90s and the early 2000s.