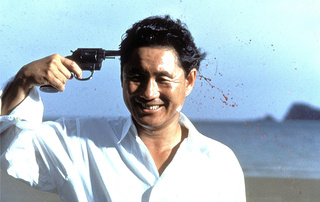 Sonatine is a 1993 film by renowned Japanese filmmaker Takeshi Kitano, and a rather odd one at that.
Advertisement:

The film stars "Beat" Takeshi as a mid-level Yakuza boss, Murakawa, who is tiring of the gangster lifestyle and planning to retire soon. Murakawa is to be sent with numerous other Yakuza to Okinawa to mediate a conflict between two Yakuza clans and reach a truce. Upon arriving in Okinawa, things take a turn for the worse. Murakawa's temporary HQ is bombed and he is ambushed in a bar with many of his men, leaving several of them dead. Murakawa and the survivors flee to the seaside and take refuge at a house on the beach and wait for the conflict in Okinawa to settle before returning. Free of danger and restrictions, Murakawa and his men begin turning their time of being forced into hiding into a wacky vacation. Murakawa and his men play Russian Roulette, play pranks on each other, play frisbee, shoot at said frisbee, and more. Murakawa even finds love in an abused woman, Miyuki, who shows up to the beach. Everything is fine as the group lives carefree on the beach. But then, things take a turn for the worse.

Though a commercial failure in Japan, the film received the praise of critics and led to successful sales in Europe, eventually garnering the film numerous awards. The film was perceived as a serious step forward for actor/director Takeshi Kitano, previously known mostly for his comedic work, who would go on to become one of Japan's most lucrative and renowned contemporary filmmakers.

Sonatine is unique in that it starts as a standard-fare gangster crime film, but is turned on its head, changing into a violent, philosophical arthouse film painting the portrait of an aging gangster on a personal journey to find oneself and live life to it's fullest, but is denied the wish to leave his criminal life behind. A must-see for fans of Takeshi Kitano and Japanese cinema.

Was brought to the states for distribution by Quentin Tarantino as a part of his "Rolling Thunder Pictures" collection.