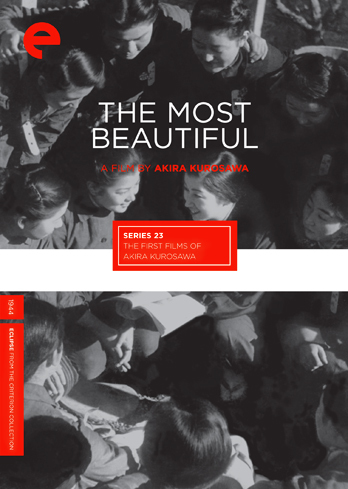 The Most Beautiful is a 1944 film from Japan directed by Akira Kurosawa.

Kurosawa's second film as a director, it is a propaganda movie—it begins with a title card saying "Attack and destroy the enemy!"—about Japanese women laboring on the home front during World War II. The East Asia Optics Factory makes precision-crafted lenses for use by the Japanese military. There is a men's dormitory and a women's dormitory, but the film focuses on the women workers at the factory, led by Tsuru Watanabe the section leader, and Mrs. Mizushima the house mother.

At the beginning of the film the girls (they appear to be mostly girls, in their late teens, still technically in custody of their parents) are challenged to raise their output of lenses by 50%. They demand to instead be challenged to raise their output of lenses by 2/3. The girls work hard, but the difficulties of life present obstacles; one comes down with a chronic cold, one regularly suffers fevers, another falls off a roof and breaks her leg. Tsuru drives the other girls to work harder, while herself fretting about her mother, who has fallen ill back home. Can the women of the optics factory reach their goal, and make more lenses for the emperor?

This and the other propaganda films Kurosawa made during the war were later regarded by him as Old Shames.

Yoko Yaguchi, who played Tsuru, married Akira Kurosawa in 1945 and they remained married until her death 40 years later.