Film / The Men Who Tread on the Tiger's Tail 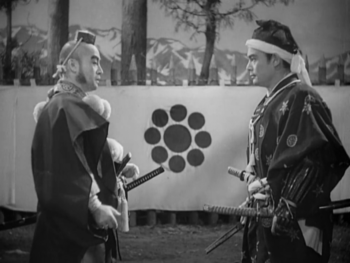 The Men Who Tread on the Tiger's Tail is a 1945 feature film (barely, 59 minutes) directed by Akira Kurosawa.

, Minamoto no Yoshitsune, and a real historical incident. Yoshitsune Minamoto has just won a great naval victory against the family's enemies, the Heike clan. However, his brother, the shogun Yoritomo, has become convinced that Yoshitsune is plotting against him. (History is ambiguous about whether or not he was.) Yoritomo has ordered his brother's arrest.

Yoshitsune, stuck in Kaga province which is controlled by his brother, seeks to escape to safe territory. As the story opens, he is headed for the border of Kaga province, accompanied only by his bodyguard Musashibo Benkei, six other loyalists, and a chatterbox porter. Eventually the little party is caught by border guards, and Benkei has to use his wits to get his master to safety.

Not shown in Japan until 1952. The film was completed at the tail end of World War II—in fact, Kurosawa and company took a break from production to listen to Hirohito's August 15, 1945 radio broadcast announcing the Japanese surrender. The American occupation authorities banned it, for fear of playing up Japanese feudal ideals.