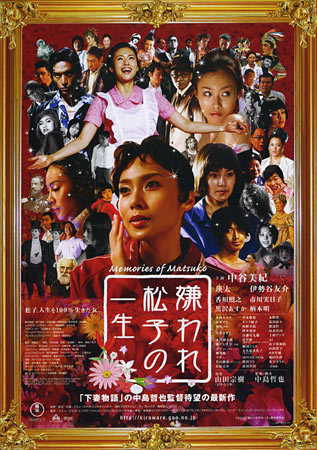 A 2006 Japanese film written and directed by Tetsuya Nakashima, based on a novel by Muneki Yamada.

Young aspiring-and-failing-at-it musician Shou, fresh from a painful break-up, is called to clean out the apartment of a recently deceased aunt he never knew he had. Aunt Matsuko, at the time of her death, was a bloated, miserable bag lady, living surrounded by mountains of trash and filth, with no friends or job. Guided by her belongings and stories told by people who knew her, Shou ventures on a journey through the life and times of Matsuko Kawajiri. He finds a starry-eyed woman who faces more than her fair share of disappointments on her quest to find the prince of her dreams. The film spans several decades, from Matsuko's childhood in the 1950s to the present day in the year 2001.

While the story itself is quite tragic, it's peppered with upbeat musical numbers and colorful fantasy sequences, resulting in high amounts of Mood Whiplash.