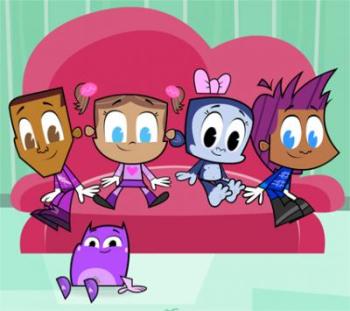 It could be mistaken for an anime, were it not for the unmistakeable New Zealand accents. Sparkle Friends is a cartoon about a team of kids, their pet gorilla Camilla, and Gun-gi, a pinkish-purplish pet/companion. Gun-gi, so called because anything he spews his gungy vomit on obtains magical powers, is central to the show's premise. It's Gun-gi's vomit which turns the kids into action heroes (although most episodes are just about them having random adventures).

Created by Kiwi animation studio Mukpuddy to serve as an animated segment in NZ kids show What Now, the main human cast consists of anime-style younger versions of the hosts. Consequently, as hosts come and go, the cartoon characters change. Gun-gi, Camilla, and the kids Charlie and Serena are the only characters to feature in every single episode.