Film / Sound of the Mountain 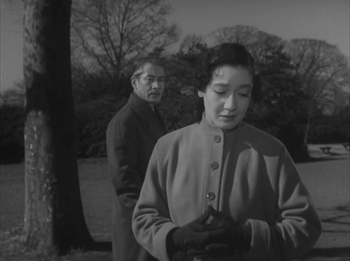 Sound of the Mountain is a 1954 film from Japan, directed by Mikio Naruse, starring Setsuko Hara.

Ogata Shingo is a businessman who employs his son Shuichi. Shuichi happens to be married to the gentle Kikuko (Hara), and they live together with Shingo and Shuichi's mother Hideko. It soon becomes clear that Shuichi is an awful awful husband, coming home drunk late, emotionally neglecting his wife, and worst of all having an affair that he isn't even trying very hard to hide. The domestic tranquility of the Ogata home is further shattered when Shingo and Hideko's daughter Fumiko arrives, two children in tow, announcing that she has left her husband.

Compare Late Spring, another Setsuko Hara film for which this could easily be a sequel.