Film / The War In Space 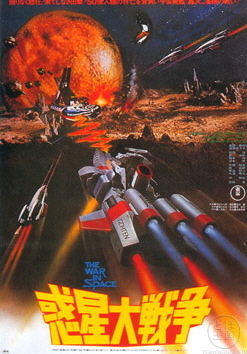 11 years from now, on Venus...
First came The Mysterians, then Battle in Outer Space. Then in 1977 the loose trilogy of Toku alien invasion films was concluded with Great Planet War (惑星大戦争, Wakusei Daisensō), screening in the U.S. as The War in Space.

Essentially the last tokusatsu film Released by Toho until The Return of Godzilla, and thus the last of the informal "Showa" era.