Film / The End of Summer 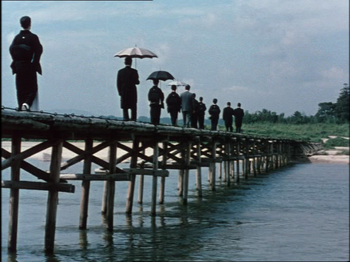 It centers on the Kohayagawa family, which operates its own sake brewery in Kyoto. Patriarch Manbei is semi-retired from the operation of the brewery, which isn't doing particularly well, small independent companies like his having to struggle against the conglomerates. He is more concerned with getting his female relatives married off. His daughter-in-law Akiko (Setsuko Hara, in her sixth and last film with Ozu) is a widow in her early forties; Manbei's brother-in-law is trying to get Akiko paired off with a friend of his. His daughter Noriko is unmarried and works in an office; for her the family has chosen a well-to-do beer salesman. Unbeknownst to them, Noriko has fallen in love with one of her coworkers.

Manbei, however, has more on his mind than getting younger people married. It turns out that he has been sneaking out of the house, avoiding the sharp eyes of his daughter Fumiko (who lives at the brewery with her husband Hisao, who's running the business). Manbei has been making surreptitious visits to his old mistress Sasaki, whom he recently ran into after not having seen her for nearly 20 years. Sasaki has a daughter, Yuriko, whom Manbei believes to be his. Most of the family is either tolerant or indifferent to this affair but Fumiko is incensed.

The next-to-last film of Ozu's career and the only movie he made for the Toho studio.