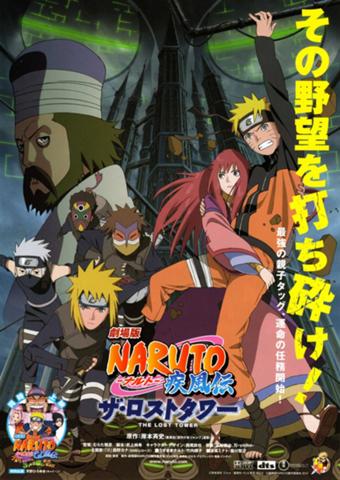 Naruto Shippuden the Movie: The Lost Tower is the seventh overall Naruto film and the fourth in the Shippuden series.

Team 7 is dispatched to the ruins of the once-glorious city of Rōran to capture Mukade, a rogue ninja who intends to tap into the mystical Ryūmyaku beneath the city to Take Over the World. While in the process of tapping into the Ryūmyaku, Mukade opens up a time rift and sucks himself, Naruto and Yamato twenty years into the past, when Rōran was still a thriving metropolis. Upon awakening and getting his bearings, Naruto as well as Yamato teams up with Sāra, the young queen of Rōran, and Minato Namikaze, who has been dispatched to the city on a mission and yet to have become the Fourth Hokage, to uncover a Government Conspiracy that appears to revolve around Anrokuzan, the minister of Rōran...

The Lost Tower features the following tropes (Beware of spoilers):