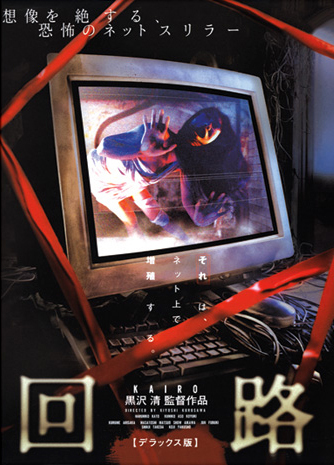 Kairo, also known as Pulse (or sometimes Circuit) in English, is a 2001 Japanese horror film by Kiyoshi Kurosawa.

During the computer boom of the early 2000s, people around the world are more connected than ever... but they might also be more isolated than they realize. Michi Kudo, a young worker who just moved to Tokyo, finds herself plagued by strange and frightening events that seem somehow connected to computers and the internet after one of her coworkers kills himself. Meanwhile, a college student named Ryosuke Kawashima has noticed his own computer exhibiting strange behavior and showing him video of people alone in dark rooms, acting bizarrely. As disappearances, suicides, disasters, and ghost sightings begin to pile up around them, Michi and Ryosuke struggle to find an explanation for what is happening and if it's even possible to stop it.

An American remake titled Pulse (no relation to the 1988 horror film of the same name) was released in 2006, starring Kristen Bell, Ian Somerhalder, and Christina Milian, and was followed by two sequels, both released in 2008. Kurosawa himself later adapted the script into a novel.

Not to be confused with the 2012 Puzzle Game Kairo.

The Japanese original contains examples of:

The American remake and its sequels contain the following tropes: