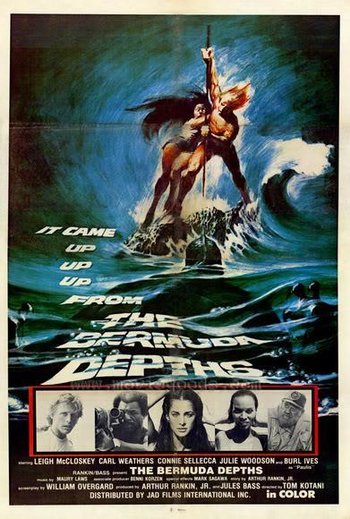 The Bermuda Depths is a 1978 horror movie that manages to combine Giant Monsters and Supernatural Romance. It was coproduced by Rankin Bass and Tsuburaya Productions of Ultraman fame.

A drifter named Magnus (Leigh McCloskey) returns to his home in Bermuda (which he left after his father was mysteriously killed years before) and is reunited with Eric (Carl Weathers), an old friend who is learning about marine biology from an old scientist named Dr. Paulus. They end up investigating evidence of a giant turtle inhabiting the local waters.

Magnus also meets a mysterious, beautiful woman named Jennie Haniver, who turns out to have been a childhood playmate of his; in fact, he’s still wearing the seashell necklace she gave him. The thing is, she only appears when he’s alone, and even Eric tells Magnus that they believed Jennie was just an Imaginary Friend of his. He insists that she was real, and that he even carved his and Jennie’s initials on the back of a turtle they played with.

Eric’s wife explains that Jennie Haniver is a local Urban Legend: Two hundred years ago, a young woman whose ship sank in a storm in the Bermuda Triangle made a Deal with the Devil so that she would survive. Naturally Magnus refuses to believe it is the same Jennie.

Eric becomes obsessed with catching the giant turtle and against all warnings uses a harpoon cannon on it. This just leads to the creature killing him and Dr. Paulus. Jennie is revealed as indeed being supernatural in the process.

Tropes in The Bermuda Depths: