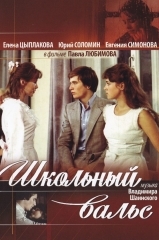 School Waltz (Shkolnyy vals) is a 1979 film from the Soviet Union, directed by Pavel Lyubimov.

Zosya (a Polish nickname for Sophie) (Elena Tsyplakova) is a Russian student at whatever is the Russian equivalent of high school. She is very much in love with boyishly handsome Gosha (a nickname for Georgy), who has ambitions to be a volcanologist. Another student at the school, Dina, is also sweet on Gosha, but is making no headway.

Gosha for his part makes quite a bit of headway with Zosya, when she sneaks him into her family's apartment for sex, sometime right after graduation. Naturally, a little bit later Zosya realizes that she is pregnant. And while all this is happening, Zosya's life is further complicated when her father leaves her unfaithful mother.