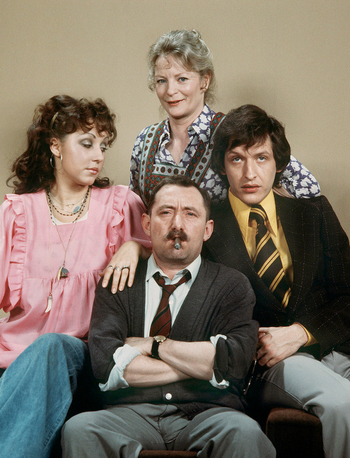 Clockwise, starting at the bottom: "Ekel Alfred", his daughter Rita, his wife Else a.k.a. "dusselige Kuh", his son-in-law Michael.
Advertisement:

Ein Herz und eine Seele (One Heart and One Soul) is a West German TV series, produced from 1973 to 1976. Being a Foreign Remake of the Brit Com Till Death Us Do Part (meaning yes, this is technically the German All in the Family), it is notable for bringing the Sitcom format to Germany.

The series deals with the everyday life of the reactionary and stubborn working class man Alfred Tetzlaff, his wife Else, his daughter Rita and his leftist son-in-law Michael.

Like Stromberg three decades later, this series is one of the very few German sitcom remakes that are actually good. This fondly remembered series can often be seen rerun in German tv to this day. Especially the episodes "Silvesterpunsch" and "Rosenmontagszug" are always broadcasted at the holidays during which their plots take place (New Year's Eve and the final day of Carnival, respectively). More recently, the episode "Besuch aus der Ostzone", in which Michael's parents from the "East Zone" visit the Tetzlaffs, seems to have been repurposed as the holiday episode for the Day of German Unity.