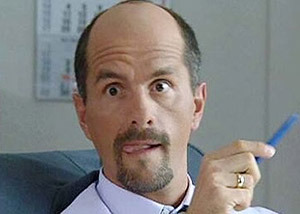 "An office is like... riding a roller-coaster. Constant ups and downs. If you have to do it for eight hours, every day, sooner or later you will throw up."
— Stromberg, in the very first lines of the series
Advertisement:

Stromberg is a German Mockumentary Work Com, on air since 2004. There are currently five seasons and one movie. Stromberg is a Foreign Remake of Gervais' and Merchant's Brit Com The Office, although it took a lost lawsuit for the makers to acknowledge this. Like Ein Herz und eine Seele three decades before, this is one of the very few German sitcom remakes that are actually good.

The main setting is an office of the fictional insurance company Capitol Versicherung AG, more precisely the Department of Damage Adjustment M to Z, presided over by Unsympathetic Comedy Protagonist Bernd Stromberg. Like in the British original, the characters are very aware of the cameras being on them, all the time. Stromberg in particular can often be seen cracking jokes and showing off for the camera.

Rarely, Ulf falls under this habit too, e.g. when he calls Lars Lehnhoff "Grinsekatze" (Cheshire Cat).