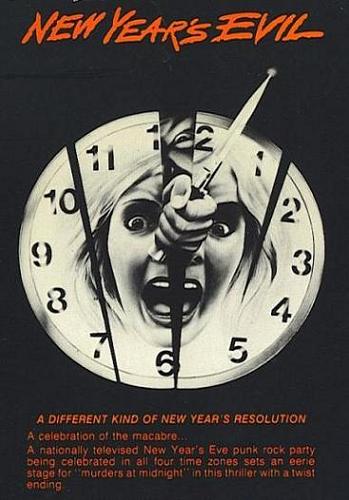 And you thought Y2K was something to worry about...
"This New Year's, you're invited to a killer party..."
Advertisement:

New Year's Evil is a 1980 Slasher Movie from The Cannon Group, directed by Emmett Alston and starring Roz Kelly (aka Pinky Tuscadero).

On New Year's Eve, punk icon Diane "Blaze" Sullivan (Kelly), who has a strained relationship with her husband Richard (Kip Niven) and son Derek (Grant Cramer), is hosting a nationally-televised kickass bash in a Los Angeles hotel, which features live performances, a call-in segment which allows people to suggest songs and vote for their favorite one of the year, and countdowns for various US time zones.

At first, things go well, until Diane receives a disturbing phone call from a man who calls himself "Evil". Evil tells Diane that he intends to kill each time it strikes midnight in a different time zone, and that he will eventually target someone close to her. While Diane is shaken by the call, everyone else dismisses it as a prank, until Evil makes good on his promise, and kills a nurse, playing a recording of the murder over the phone for Diane, who he intends to make his final victim...

A relatively early entry in the Golden Age of Slashers, New Year's Evil, despite lacking in traditional gore and nudity, has several things that set it apart; its fairly clever premise, its urban setting, an antagonist with more in common with a regular old Serial Killer (he's a completely average guy who charms his victims, and has a straightforward MO) than a normal slasher, and it also has a badass soundtrack.