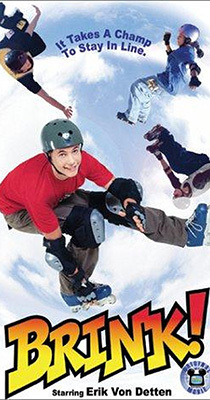 Brink! is a 1998 Disney Channel Original Movie. It stars Erik von Detten as Andy "Brink" Brinkley, the leader of a rag-tag group of skaters who skate for fun. Their main antagonists are the X Bladz, a group led by Val (Sam Horrigan) who are sponsored and skate for money. The big showdown at the end is of course a skate tournament to prove which group is the better group.

Also stars Christina Vidal as Gabriella. Considered one of the better Disney Channel original movies from the late 90's alongside The Luck of the Irish and Smart House.

This telefilm contains examples of: