Film / Man with the Screaming Brain 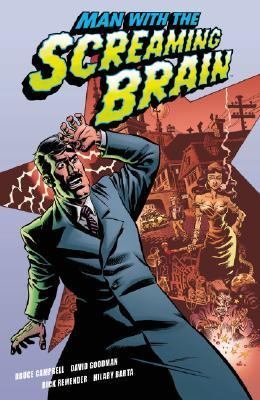 With a poster like this, you know exactly what you're getting yourself into.
Advertisement:

A low-budget sci-fi/thriller pastiche written by, directed by, and starring Bruce Campbell, Man with the Screaming Brain was released in 2005 after spending nearly two decades in Development Hell.

It tells the story of William Cole, a pharmaceuticals magnate who, while finalizing a deal in Bulgaria, suffers severe brain damage in an attack by Tatoya, a vengeful gypsy woman. A well-meaning Mad Scientist repairs Cole's brain with tissue from KGB-agent-turned-taxi-driver Yegor, Tatoya's former lover and another one of her victims. Now Cole and his Split Personality Yegor must work together to hunt down the woman who tried to murder them both. Complicating matters is Jackie Cole, William's wife, who attempts to track down Tatoya herself only to die and have her brain transplanted into the body of a robot.

Man with the Screaming Brain provides examples of: