Film / Sundown: The Vampire in Retreat 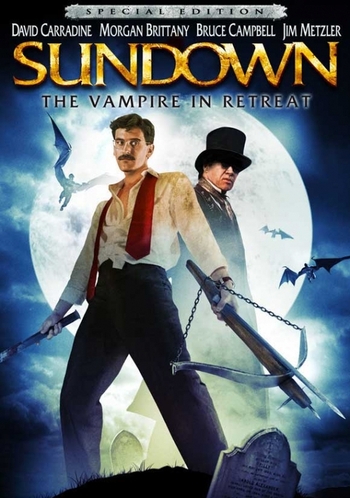 There are two kinds of folks in Purgatory: vampires and lunch.
Advertisement:

Sundown: The Vampire In Retreat, a horror-comedy-western film from 1989 follows Purgatory, Utah which is home to some of the last vampires in the modern world. Led by their founder Jozef Mardulak Striving to abstain from killing humans for their blood in the hopes of atoning for their past. Scientist David Harrison and his family arrive to town to help work on the blood plant, while a bumbling Vampire Hunter and an army of more bloodthirsty vampires who see Purgatory as a threat to their lifestyle and culture prepare to attack the town. Actors include David Carradine, Bruce Campbell, and M. Emmet Walsh

Sundown: The Vampire In Retreat contains examples of: